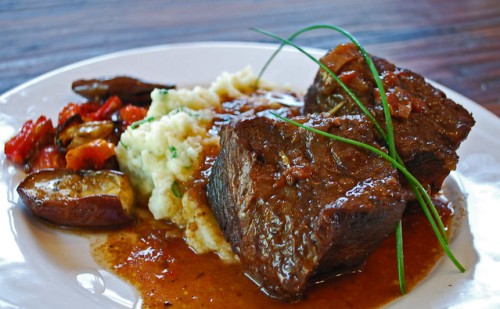 The hiss of the radiators is a clear signal that braising season is upon us! And while braises are notorious time sinks, they really are pretty damned easy. Sear the meat, take it out, brown the mirepoix, add some herbs and spices, return the meat, along with some liquid (wine, beer, stock, etc) to the pot, let it simmer for a long time, then eat.

Simple, with thousands of fun variations, most of which you can do on your own without needing a recipe. Just find a good basic recipe that works for you, then tweak it and twist it and make it your own.

One of my favorites is braised beef short ribs, but the dish never turned out the way I wanted it until I realized that it is counter-intuitive. Most dishes benefit from fat, but there is so much fat in the short ribs that removing most of it really does improve the dish. I do that by making it in advance, then chilling the pot overnight and simply scraping the excess fat that floated to the top then hardened.

So give braising a shot. It’s a great technique, the cook is rewarded by using cheap cuts filled with connective tissue (they break down over time and add to the succulence), and you can empty your vegetable drawer of that old bag of carrots, the limp celery, and the onions that have seen better days. Dump it all in and be a happy and frugal camper.


******
Gwyneth Paltrow is a dangerous fool. Now that we have that out of the way, Let me go on a bit of a rant about healthful foods and healthy foods and unhealthy foods. But let us start with a grammar lesson! “Healthy” means in good health. It does not mean good for you. “Healthful” means good for you. And I defy you to find foods that are “healthful” and “unhealthful” independent of dose. And what I mean by that is simple…food is fuel, with a few vitamins and micro-nutrients thrown in for good measure. Most people get those vitamins and micro-nutrients from their diet without any attention being paid to much at all. So we are left with the inescapable conclusion that most food is just fuel.

Lamb rib chops are great too. Get them “French” cut, which leaves the rib handles. Marinate them as CBD suggests with olive oil, crushed fresh garlic, salt, and balsamic vinegar. We call them lambsicles.

“Frenching” the ribs, whether it is on a lamb chop, a pork chop, a beef rib steak or a bumblebee is a crime against nature. That’s why it’s called “frenching!” Duh!

The meat and fat and other stuff on the ribs is a delicious bonus and should never, NEVER be trimmed off. However, I approve of this poor deluded Wisconsinite’s recipe, although I would add a bit of chopped fresh rosemary to the marinade!


******
Yum. Not that a bolognese sauce is anything arcane or rare, but he puts Spanish chorizo in it, and that sounds great!

Don’t confuse it with the Mexican version (which also has its uses), and if you have any left over, then make paella, because chorizo is fantastic in paella!

Found Haleem by accident at an Indian buffet in San Fran that had it…good thing that the lights were low. It’s very ugly no denying it.

Traditionally eaten to break the fast during Ramadan, but as there are no committed middle eastern or Indian restaurants near where I live, I thought it sounded like good cold weather eating and have made it from time to time.

Restaurant had it with lamb. Lovely. I made it with beef, s’okay. But then someone gifted me with a three year ole moose roast and I thought with all of those spices, it’d do.

What I’ve learned over the years is that moose + cumin are meant to be (other stories). There is pretty much every spice you’d want in this dish. But add a strong flavored meat and this is amazing. It does not hide the flavor, it augments it and elevates it.

This week a friend tried my recipe but subbed 15 bean mix beans for the lentils (avoiding the ugly presentation of lentil stew) and caribou (!) for the lamb or moose.

Better than lamb or moose with lentils. Seriously.

Get your hoar frostiest mutton out of the freezer and try this. Divine! Even if you don’t like mutton although I know you do.

Here is an easy recipe; I’m sure there are more difficult ones out there. I love to shred the meat but some people hand blend I guess. I’m not big on making home cooking fussy and this is home cooking.

Looks interesting, and Lou’s point about strong-flavored meats is a great one. I have always wondered why some famous dishes use a mild meat and a strong-flavored spice mix or accoutrements. Like…veal saltimbocca! I love the dish, but why waste mild veal? Use pork or chicken at a quarter the price.


******
One of the pleasures of cooking is the mastering of techniques that make everything easier and faster and better. Ramsey may be larger than life, but he started out as a great chef, and that hasn’t changed.

For most of us this is easy stuff, with a bit of a twist that I blame on his upbringing. Olive oil in the pasta water? Nope, not necessary.


******
I love baking the receptacle for this dish. What a nice idea. The recipe isn’t clear, but it sounds like you just wrap the baked pizza dough around the food, maybe like an ice cream cone or a burrito. Who knows, but it sounds like fun and I’m going to try it.

The cacciatore recipe is different too, without tomato, which is a new one for me (thanks Bluebell for pointing that out).


******
Food and cooking tips, Castelvetrano olives with a sprinkle of chili flakes, young wild pigs, crisp bacon (although I am moving toward less crisp), thick and fluffy pita, and good tomatoes that aren’t square, pale pink and covered with Mestizo E.coli: cbd dot aoshq at gmail dot com. Any advocacy of French Toast with syrup will result in disciplinary action up to and including being nuked from orbit. And yes, shaking a Manhattan is blasphemy…it’s in the Bible!