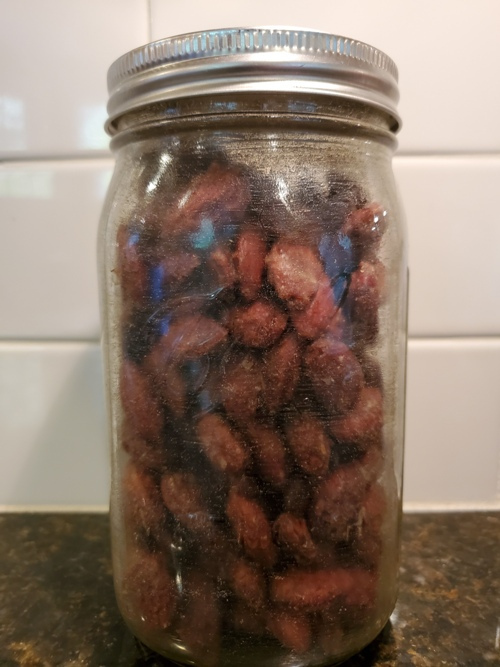 Our intrepid exercise-yard enforcer and fine cook Bluebell sent me a recipe for “Savory Spiced Pecans” a long while ago. I resisted them for as long as I could, but finally relented, and they are fabulous. Now, I would call them more sweet than savory, but hell, she’s a Red Sox fan, so the fact that everything was spelled correctly is a great victory!

Anyway, I melded her excellent recipe with a much less successful recipe for “Spiced Almonds” that I found in the New York Times, and the results are above. The jar is sort of cloudy and dirty looking because the butter and sugar mixture doesn’t really get perfectly hard and dry, but that is perfectly all right, because they taste great!

Here is a link to the PDF of the recipe. It’s pretty straightforward, and to be honest the most important part is the technique from Bluebell’s recipe. The spice mixture I used can be changed according to your palate.

Coincidentally I was wandering my local market a few days ago and saw a display for spiced cashews. Now, that is also a fine idea and one that I will be exploring in the near future. Made in my own kitchen, because $14.99/lb. is just…um…nuts!


******
I have extolled the virtues of the Brit’s “Sunday Roast,” and have recommended that we embrace it and improve upon it here in America.

The Ritual of Sunday Roast

The classic meal is a gray-weather-soothing, all-day-eating, then veg-on-the-couch-in-a-food-coma affair (think Thanksgiving, if it came once a week), and the communing around slabs of roast meat is a remarkably sturdy tradition—one that’s survived mad cow disease and the new appreciation in Britain for healthy (even vegan) eating and remains a nostalgic bulwark against the spread of American-style brunch.

Yup…The Sunday Pub Roasts I have attended were conspicuous in their overindulgence of wonderful, fatty, rich, alcoholic comestibles, and even more conspicuously short on healthy alternatives. It’s almost as if people like to eat good food and drink good booze and have a good time, and are less concerned with the politics of food (because that is what veganism is: pure politics). I don’t appreciate the shot at American brunch though. It’s not that big a deal in many parts of the country.


******
I like looking at these sorts of things because they are usually total crap, and this one stays true to form. My first hint was the incorrect conversions for weights and volumes. But it is, as you have probably already guessed, just clickbait. But a six-month Gold Membership with Ampersand utility for anyone who can find three glaring errors.

152 Things You Must Know In the Kitchen — Ultimate Guide

Hat Tip: Misanthropic Humanitarian (although I think he was trolling me)

“Arby’s is not one of the restaurant companies interested in working with Impossible Foods,” Arby’s said in a statement this May. “The chances we will bring plant-based menu items to our restaurants, now or in the future, are absolutely impossible.”

In fact, Arby’s is so opposed to the idea of plant-based meats, that they’ve decided to essentially troll the entire fake-meat industry by creating a fake vegetable, called a “megetable.” 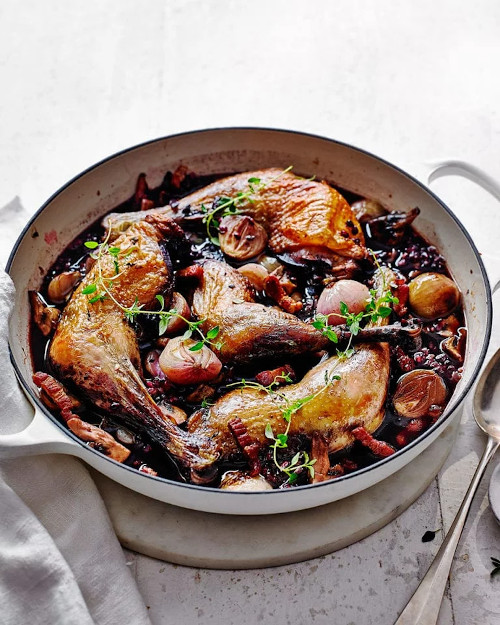 Coq au Vin is an immensely satisfying cold-weather dish, but there are many recipes that are overly complicated and just too much of a slog for it to be in the regular rotation for many people. This recipe is pretty straightforward, although it is written in European Kickball units, so you will have to translate to a civilized language.

As for the two bottles of red wine? Buy something cheap from Australia. It will be plenty rich enough, and it won’t break the bank. Or even use one bottle of red and replace the second bottle with chicken stock. It won’t be quite as rich, but it will be good. And for my sake don’t use three bay leaves. That is at least one too many.


******
I absolutely love when market forces are unleashed to fix a problem.
Putting purple sea urchins on the menu could save California’s kelp forest
But because it is California, it gets stupid:

The reason for this growth in numbers of the purple sea urchins comes down to rising sea temperatures, but also a disease that affected the sunflower sea star, the urchins’ predators.

When in doubt, blame global warming! Never mind that there is another perfectly reasonable and far simpler explanation for the increase in the sea urchin population.

I spent an amazingly painful few hours in the ER, having a bunch of their spines removed from my heel. They went through my fin strap, through my bootie, and deep into my foot. So anything that knocks down their population makes me a happy (and vengeful) abalone diver.


******
Food and cooking tips, Castelvetrano olives with a sprinkle of chili flakes, young wild pigs, crisp bacon (although I am moving toward less crisp), thick and fluffy pita, and good tomatoes that aren’t square, pale pink and covered with Mestizo E.coli: cbd dot aoshq at gmail dot com. Any advocacy of French Toast with syrup will result in disciplinary action up to and including being nuked from orbit. And yes, shaking a Manhattan is blasphemy…it’s in the Bible!

One Reply to “Nuts! Anthony McAuliffe Would Be Proud”