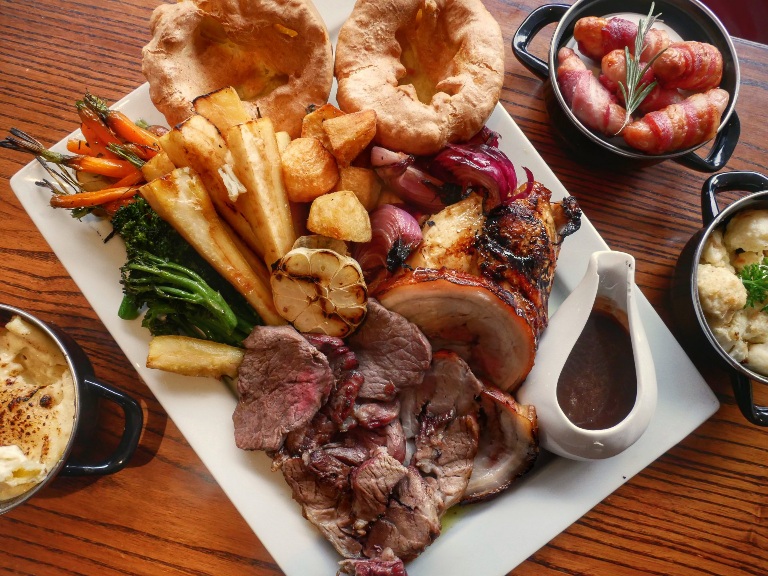 Ah…the Sunday Roast. A tradition in the UK that is a fine example of their civilization, now sadly depleted; but the roast still hangs on as a wonderful reminder of what once was.

And it isn’t just the food, or to be honest, until recently it was in spite of the food! Although the food at many Sunday Roasts is quite good; but better than the food is the friendship and fellowship that it seems to amplify. It is a leisurely meal, with drink and conversation and comfortable pauses to look at the roaring fire or the other diners or just gaze into the middle distance.

And it isn’t reserved for restaurants. Plenty of people will make traditional Sunday Roasts at home. We had dinner with an expat friend who was quite proud of her Sunday Roasts; in particular the Yorkshire Pudding she has perfected. She can even make them puffy, or with a dip in the middle, depending on how one likes to eat it!

It is a lovely tradition, sort of an enforced pause in the frenetic pace of life. And I wonder whether the “roast” part evolved specifically to slow down the pace of cooking and reinforce that leisurely ramble through Sunday afternoon. After all, you can’t rush a roast leg of lamb…it will be done on its own schedule!

But…no rush…it is Sunday, and the whole day is ahead of you!

Why am I waxing poetic (badly) about a British tradition? Well, I am flying back from there instead of writing the Food Thread. I have spent the week seeking good English pub food and great English Bitters. And here you will find my embarrassingly amateurish attempts at food photography, with a little tipsy commentary thrown in for good measure!

A nice pub in central London (Covent Garden), where I had my first English ale in more than two years, courtesy of Wuhan Flu. That’s a Nicholsons…one that I have never had…and it was quite tasty! It is in a class of beers called “real ales,” which means that they undergo a secondary fermentation in the keg or cask. In addition, they do not use CO2 as a propellent, using hand-powered taps instead. And best of all? They are low in alcohol, so I can have a proper English pint (or three) of 20 ounces without feeling tipsy and able to belch Beethoven’s 5th..

Why yes! That is Fish and Chips with some mushy peas, eaten with great gusto at a pub on the Thames called “The Gun,” whose name comes (supposedly) from the cannon fired to celebrate the opening of the West India Import Docks in 1802. Yup…this is East London, and it got Goering’s full attention in WWII. Oh, they claim that Lord Nelson used to meet Lady Hamilton in one of the upstairs rooms! He was killed at Trafalgar in 1805, so it may be apocryphal, but I choose to believe it!

Lest you think that all pub food is simple fare, that is a perfectly roasted chicken breast and wing with an excellent pan sauce. This is exactly the sort of food I think of when I defend English cooking. Two generations ago that would have been an overcooked mess. But today, perhaps pushed by the influence of a wealthier country and many more people traveling the world and eating all sorts of good meals, one can get food that is the equal of anything in the world.

Dessert was good too! Some sort of mousse, but very thick and chocolaty. It came with a mandarin orange Granité that was nice and tart and went well with the richness of the mousse.

After a few hours tramping around The National Gallery I was a bit peckish. And what better way to ease my hunger pangs than to try some typical English fast food. Nothing fancy, but it was shockingly good! The pastry was perfectly crispy, and the sausage meat was nicely spiced and not fatty or gristly. I ate only one, and that was a significant tactical error.

The Gin & Tonic is a close second to beer as the national drink of England, and so it makes perfect sense that they take their tonics seriously. I counted four different ones at the hotel bar, along with about 20 different gins.

I don’t have the palate to differentiate the gin in my G&T, but the tonics themselves are quite good. Less sweet than the typical tonics in America, and sort of subtle and complex.

That is a perfectly cooked mutton chop with a small slice of mutton belly (sadly, a bit overcooked, but still tasty) and a mutton croquette that was deliciously crispy. I guess mutton is an acquired taste, but anyone who has eaten wild game will certainly enjoy it. I have no idea where to get it in my neck of the woods…the last time I bought it was years ago. There is a famous chop house in NYC that made its reputation on their mutton chop, so it is definitely available in the U.S. I have had the mutton at Keens Chop House, but the one in the photo was easily its equal!

How could I resist a nice slice of smoked pork loin with the delightful bonus of some fried eggs? The answer is: I couldn’t! I didn’t know what to expect because it was described slightly differently, but it turned out well; nice and smoky with a bit of fat, and the eggs went nicely with the pork.

It is an odd choice for smoking…I would have smoked a boneless shoulder because it is fattier and would stand up to the drying smoke a lot better. But it did taste good, so that is just a quibble.

Yes; there is a theme to my visit to London. Those real ales are something special. And for any of you who are sick of the over-hopped, overly-alcoholic IPAs that still dominate American craft brewing, they would be a revelation. I hope that they catch on in America, because it really is a long trip to go to London for a beer.

Romaine lettuce that is green, instead of the white crap they sell that has never seen a photon, pork rib roasts from the front end of the pig where all the good and fatty meat lives, carrots that don’t taste like stalky chalk, spare bottles of Van Winkle Special Reserve 12 Year Old Bourbon, an herb garden that actually produces herbs (but no basil!), well-marbled NY strip steaks and elk backstrap to: cbd dot aoshq at gmail dot com.

And don’t think that you are off the hook with maple syrup and French Toast: I’m watching you…all of you! And I am watching you perverts who shake Manhattans and keeping a list for the Burning Times.